Today was a very lazy day in comparison to yesterday...and the main reason was rain! It rained all day! I can't describe how nice it is after the intense heat, though the humidity means it's still pretty sticky. We slept in anyway, after such a big night on Miyajima, and we got up in time to head to Ippudo for delicious ramen lunch. We wandered through the shops to the Peace Park, intending to do the Hiroshima Peace Memorial Museum, but it was INSANELY crowded and was really not worth the crowds. Also, for anyone interested in visiting before 2018, the East Wing, which has some really interesting stuff in it, is unfortunately closed for renovations. Instead, we visited the Hiroshima National Peace Memorial Hall for the Atomic Bomb Victims, which I had not seen before, and it was very affecting - they play videos of survivor testimonies, and have a beautiful Hall of Remembrance, with 140,000 tiles to represent the (approximate) number of victims of the bomb. We plan to return to do the Museum tomorrow morning. We headed back home, stopping for a drink and to play more racing games on the arcade machines (I am getting seriously addicted), and then grappled with the washing machine despite all instructions being in Japanese with no English whatsoever. Currently waiting to see if we have operated the dryer correctly....

Clothes washed and dried successfully! And with that, we were off for okonomiyaki. It was 9pm by the time we headed out, and we were going to try a tiny little okonomiyaki place right near our apartment. At 9.15pm we asked if they were still open and he told us in broken English that he was sorry, they actually had closed 15 minutes ago and were just packing up. We said okay, and went to keep walking, then he asked if we were tourists and where we were from. Then he invited us in anyway! He cooked us DELICIOUS Hiroshima-style okonomiyaki and chatted to us about Australia and traveling and food (his English was really quite good), and introduced us to his parents who were helping with the washing up. It was a perfect, uniquely Japanese experience, and I was so touched by his kindness. 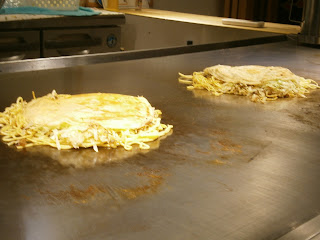 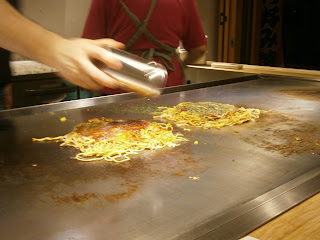 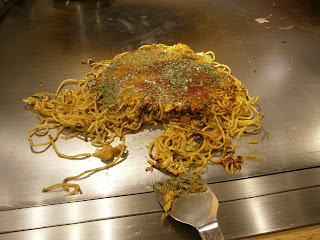 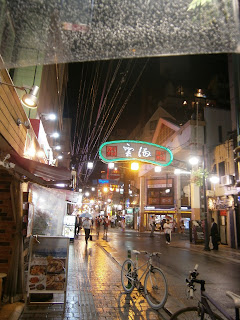 We then went on an adventurous walk to a bar Sean had seen recommended. It supposedly had English-speaking staff, which we discovered was correct, but it also seemed to have every English-speaking person in Hiroshima jammed into it as well, which those of you who know me personally will realise is not my favourite way to spend an evening. HOWEVER, it got awesome. We met some great people (one of whom grew up in Burwood East and his sister knows my brother - too weird), and we wrote on the decorated walls of the establishment in permanent marker to commemorate our visit. We got home far too late, but it was a good walk, and we need to be up bright and early to meet new mates at the Peace Park tomorrow. Sayonara!
Posted by Miss Prince at 09:35