In Seoul, via Osaka!

So I haven't blogged for a couple of days, but it's because we haven't done anything too exciting - we have been on the move. We left Kyoto and our lovely hostel yesterday and took the bus to Kyoto Station. Sadly, I had decided not to attempt Harry Potter Wizarding World in Osaka. I KNOW. I regret it too. But it was going to be too hot, too crowded, too expensive, and too much of a time risk for this trip. So next time! For sure.

The train to Osaka is real short, and we planned to find coin lockers for our luggage and see a bit of the city before heading to our hostel. This would have been the perfect plan had there been any available coin lockers large enough for my suitcase, or any space at the luggage desk. The luggage gods were not smiling on us. It was actually totally okay though, because I elected to sit and drink a green tea latte and read this amazing book (It's called 'The Sunne in Splendour' and it's by Sharon Penman, and I borrowed it from my dear friend Alfie and it's about the life of Richard III and it's completely amazing...okay, I'll get back to the travels) while Sean went exploring. When he got back, we went for yummy ramen and then trekked across Osaka (and by trekked I mean, sat comfortably on a train) to our AirBnb right near the airport. It was a really comfy, compact little flat, and we went for a walk later on to find some dinner (Italian FTW, including creative dessert), and were home relatively early.

This morning we upped and left the flat, hopped on a very short train to the airport, and had a BREAKFAST PANCAKE! It was actually amazing, despite consisting of pancake, bacon, egg, prosciutto, tomato sauce, mayonnaise, avocado, and mashed potato. I bought some really disappointing peach rice cakes (peach momiji manju is MUCH nicer) and they even fed us lunch on the 90 minute flight to Seoul (thanks Korean Air!) 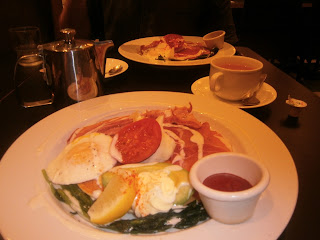 At the airport, Sean's lovely mate Keith was there to collect us, which meant we got to his apartment a lot quicker than we would have via public transport. He is with the US army, so we are staying on the base with him. Tonight we planned to go out for dinner and see Seoul Tower, but North Korea totally threw a spanner in our plans (well, actually, they threw a shell at South Korea), so the base is on alert, Keith is at work, and Sean and I are hanging at his apartment. Sean planned to do a tour of the DMZ tomorrow (the border between North and South), but I highly doubt that will go ahead given that parts of the border are being evacuated. We shall see!