An unexpected fall into Sydney

Long time readers of my blog (hello, three or four people that you number!) might recall my last dealings with Jetstar, when I went to Japan with family. Due to the 18-hour delay on our flight to Narita, we were each issued with a $100 Jetstar voucher. It was set to expire in September, and I hadn’t given it too much thought, because I figured I wouldn’t have the time to go anywhere. But after receiving my August roster, and noting that I had a spare two days, I thought I’d check it out regardless. $77 later (plus the voucher money), I had plane tickets to Sydney. I didn’t get too excited until I realised it had probably been a good thirteen years since I had been there, and started to realise how much I had forgotten about it. I was able to stay with Margi (Mum’s cousin) and it was so good to catch up with her and see Padstow again.

Dad and Riley drove me to the airport, and as we turned into the carpark, I got an email from Jetstar to say my flight had been cancelled. Ah, Jetstar. Not that it surprised me, but I figured I may as well go inside and talk to someone at the desk. Luckily they were able to fit me onto a flight that only left half an hour later, so we all sat in the food court and waited. Ever since my first European trip, when I was 18, I have simply loved being in airports. I don’t even know why. I think I just associate them with traveling and all the great experiences that go along with traveling. Either way, I get really giddy and excited in airports. I’ve even managed to get over my fear of flying. I mean, no one likes flying (and if you do, you’re weird and I don’t want to talk to you about it), but I’m over that phobic sense of doom that comes from being in the air in a big metal box.

Margi picked me up from Sydney Airport because she’s awesome, and I had the best night’s sleep in one of the comfiest spare beds I’ve ever slept in. Perfection.

I got up early on Tuesday (well, 7.30, but that’s pretty early considering I was on holiday) and walked to the train station. The sun was already warm and delicious and there were no clouds, and I was listening to a Sonya Hartnett audio book and Padstow is gorgeous, and it really was such a gentle and perfect start to the day. It took about fifty minutes from Padstow Station into Town Hall Station, because luckily enough, Sydney Airport is on the same line as Padstow, which is handy for visitors. I bought a hot chocolate and a bacon and egg muffin and sat in this cute little cafe to wait for the walking tour to start (I was way early). The walking tour I went on was run by I’m Free Tours, and most of you will know that I was a guide for this company in Melbourne for about five months this year. Annoyingly, I had to give it up because uni was too demanding of my time, but I wanted to do the Sydney tour, which has been running for four and a half years! My guide, Justine, started the tours with her boyfriend Ross, and was really interested when I told her I had worked with the tours in Melbourne.

We started at the Town Hall, and walked through the Queen Victoria Building. We saw the Pitt St Mall, and Hyde Park, including Raymond the dancing pensioner, made famous in a Tropfest film! Woo! We walked along Macquarie St and saw the old rum hospital and the Hyde Park Barracks Museum, and Sydney’s oldest church, St James. The little cross on top was once the highest point in Sydney....

We walked down Martin Place, peeking in at the anchorwoman reading the news, and saw the enormous GPO, with the ANZAC cenotaph in front. We saw Sydney’s sweet attempt to compete with Melbourne’s street art/laneway culture - in Angel Place, they’ve suspended a canopy of 110 empty birdcages as a tribute to the many species of birds driven out of their natural habitat by the building of the city. It was quite beautiful. We had a break in Australia Square, with the charming sculpture of the ‘Waiting’ businessman, by Seward Johnson Jr. After our break we kept walking, heading up to Customs House with it’s scale model of Sydney beneath a transparent floor. That was pretty impressive. Customs House also had a number of swastika-like symbols in the foyer, and a sign up explaining why they had chosen to keep them there, despite the very negative Nazi connotations associated with the symbol. The swastika, at some point or other during history, has been appropriated by most major religions and stands for peace and Customs House says it’s important to remember it’s lovely origins, and try and reclaim them.

We headed through the beautiful Circular Quay, past buskers and holiday makers, saw Cadman’s Cottage and walked up through the Rocks. I’m Free Tours also offers a night tour of the Rocks at 6pm (all nights except Christmas Day and New Year’s Eve) that goes into more detail about it’s crazy history full of mystery, murder and mayhem. I had planned to do it, but found myself far too tired, so I’ll save it for my next trip. We did, however, see some parts of Rocks on the normal day tour that were interesting: the only roundabout in Sydney where it would be legal for me to graze my sheep; the Hero of Waterloo pub, famous for getting sailors drunk, waiting for them to pass out, then kidnapping them and forcing them into slave labour on ships; and a view and explanation of the history of Fort Denison. The tour finished at the Overseas Passenger Terminal, with a perfect view of the Opera House. The tour was chock-full of interesting history and trivia about the city, much like the Melbourne tour. It’s such a good way to spend a morning, and includes heaps of useful info about what to do during your stay. It also includes a free map with info on free stuff, cheap eats and attractions, and transport. Most importantly, make sure you TIP. Yes, it’s free, but it is the guide’s job. They make no wage or salary, so they live off their tips. As a former guide, take it from me. TIP DECENTLY. 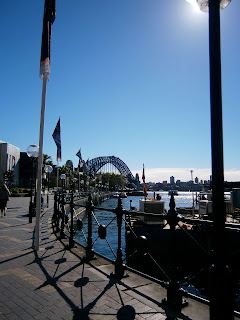 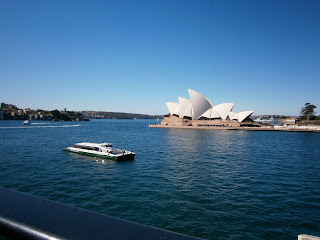 After I’d finished the tour, I stopped for lunch of roast pumpkin, apple and chestnut winter salad and a cider and I sat outside and basked. I headed to The Rocks Discovery Museum which provides a pretty comprehensive history of the area divided into four ‘eras’ - pre-European colonisation, as a convict settlement, as a port, and the 20th century history. I had a huge chocolate ice-cream and went back to Customs House and lurked around their library trying not to spend all my spare time indoors. By the time I hopped on a train back to Padstow, I was nearly asleep on my feet. I accidentally power-napped when I got home and lay down on the uber-comfy bed, but half an hour later I was up again, and spent the night catching up with Margi and eating pizzas. Bliss!

The next day I let myself sleep in for an hour, but I was still on the train and in the city by 10.30am. After breakfast, I did the Writer’s Walk around Circular Quay, which comprises about 60 plaques set into the ground stretching all the way from the Opera House, round Circular Quay nearly to the Overseas Passenger Terminal on the opposite bank. I think I managed to miss a few plaques (I don’t think I quite reached 60) but I took photos of some and read every word. They encompass both living and deceased writers, who are with Australian or who have visited Australia. For instance, May Gibbs and Banjo Paterson are obviously mentioned, but so are Charles Darwin and Arthur Conan Doyle. It was a real eclectic mix. 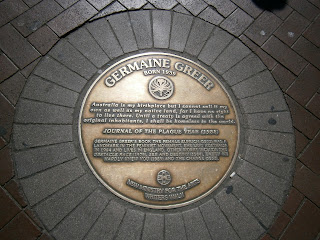 I headed into the Museum of Contemporary Art because it was so close by, but, embarrassingly, I didn’t look at any of the art. Instead, I spent lots of money on presents at the gift shop. I was waiting to start a guided tour, but I was investigating my map of Sydney and thought I’d try the Art Gallery of NSW instead, so I walked from Circular Quay, through The Domain, to the Art Gallery. I stopped for lunch and had a grilled chicken burger with avocado and Swiss cheese and then spent an hour wandering around the European collection at the Art Gallery. It’s handy knowing what I like to look at most - pre-20th century European art - because it means I can be in and out of an art gallery quickly, particularly if I’m pressed for time. The Art Gallery of NSW has some really beautiful sculpture as well.

I walked from the Art Gallery, back through The Domain and down into Hyde Park and went to the ANZAC memorial. It’s a really solemn place, but strikingly beautiful with a really moving ‘sacrifice’ sculpture in the middle. There’s also a little museum on the bottom floor which is free to look at (as is everything I did today!). My legs felt like someone else’s, so I headed back to Padstow, stopped for an orange juice at a nice cafe near the station, and walked back to Margi’s. Margi really kindly drove me to the airport and I was on a plane, with a stomach full of airport pad thai by 6.30. Sean picked me up in Melbourne and I went home to unpack!

It was a great mini-break, and a wonderful way to rediscover Sydney. I’ll definitely be back soon, but I still maintain that Melbourne is better. I also really enjoyed sightseeing on my own - moving at my own pace, doing only the stuff that really interested me, eating HUGE amounts of food...yeah. Loved it!