Okay! So last night Dad and I headed to Akasaka station to meet Keiko and her sister. Keiko was the tour guide who took Dad's first tour in Japan. When he returned with the Honda Car Club, Keiko took their group around as well. She is incredibly knowledgeable and a passionate traveler, as is her younger sister. On the way, we meet a lovely guy on the train who we managed to communicate with in broken Japanese and English. He asked where we were from and when we told him, he responded that he had been to Australia for his honeymoon. When he got off at his stop, he waited at the window and waved and bowed to us as the train left. Little moments like that are why I love traveling. Even when you can say very little to each other, enthusiasm, interest and a smile go a long way.

Before we met with Keiko, Dad wanted to take me to Shibuya crossing, a very famous and busy intersection in Tokyo (sort of like Times Square, but a bit smaller). We took plenty of photos from the elevated windows of the train station, but then we got down to ground level and walked across it. It was chaotic and noisy, and heaps of fun. Shibuya station is also famous for an akita named Hachiko that used to come their every day to see his owner, a professor, off to work. Then he would come back in the afternoon to meet his owner's train. One day the owner died at work, and obviously never arrived home on the train. Hachiko then came to the station every afternoon for nine years, waiting for his master. Sort of like the Japanese version of Greyfriars Bobby.


While we were waiting for Keiko, I found a bookstore with an English-language section, like the homing pigeon I am. They had a group of children's books in English with a word guide at the back to help people learn the language - books like Snow White, Grimm fairy tales, Alice in Wonderland etc. And I found a copy of Peter Pan. Some of you might know I collect editions of Peter Pan, so of course, I had to buy one. Only 800 yen (about $8)! 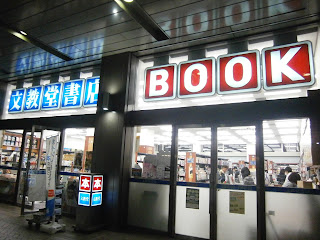 We met Keiko and her sister and they took us to a restaurant in Akasaka, which is a more business-y district - not so many tourists. We walked for ages past all these restaurants that normal tourists would have gone into, then went up to the sixth floor of this random building and went into a traditional restaurant which I can't tell you the name of because it was written in hiragana. We were, I think, the only Westerners there, and the menu was completely in Japanese. Keiko and her sister ordered for us, asking us what we would and could not eat, but we pretty much said we would try anything. The advantage of these multi-course meals is that usually if there is something you can't stomach, there is so much else to try. However, there was not one dish last night that I didn't enjoy. Highlights included tiny scallops with the skin of tofu (a nutritious delicacy), sea snail (whelk) in some kind of spicy, tomato-y sauce, seaweed broth with eggs, tofu, minced fish, tendons (of what I don't know) and a potato-y vegetable marinating in it, Japanese radish salad with cherry tomatoes, tofu, lettuce, tiny dried fish and plum sauce, fresh grilled bamboo (in perfect season - tasted a bit like roast potatoes), bonito (a type of raw tuna that is seared slightly and dipped in soy sauce) with clams, and beef sushi, which was rice wrapped in beef that was cooked with a blowtorch at our table. Then you add ginger and vegetables (and wasabi and garlic if you like), dip it in soy sauce, eat it and cry because there isn't any more. Abso-friggen-lutely delicious.

Talking to Keiko and her sister was wonderful. They both have amazing English and are prolific travellers. They told me some highlights of their favourite holidays, and I have now added salt lakes in Bolivia to my bucket list. We talked a bit too much and lost track of time, so we didn't leave the restaurant until about 11pm, by which time Dad and I were so tired we struggled to stay awake on the train back to Ueno. But we succeeded, and crawled into bed and fell asleep pretty much instantly.

This morning we slept in until about 9am, and then after a quick breakfast in the hotel, we headed back to Ueno station and organised our Japan rail passes, which we are activating tomorrow to get to Takeyama. We then took the train to Tokyo station to suss out where our Takeyama train would leave from and we were going to take a Hato bus (tour bus) around the city but they were sold out. This was mostly because it rained all day! Unusual for this time of year, but it didn't ruin our day. We took Marnie and Margaret back to Shibuya crossing so they could see it, and stopped for lunch. I had heard about this cafe somewhere in Tokyo, where you have your cup of tea or coffee and can play with a bunch of cats that are in the cafe. It sounded completely adorable, but I kept forgetting to google it when we had wifi. Seeing as this is our last afternoon in Tokyo, we thought we'd take a chance and ask someone. We discovered that the cafe was right here in Shibuya, 5 minutes from where we were having lunch!! Extremely pleased by this coincidence, we tracked down a tourist info office to get exact directions, and Marnie and I went to Happy Nekko (hapineko?). For about 10AUD you get 30 minutes in the cafe with a complimentary drink. There were probably about eight or nine cats, but half had pink and white collars on which meant we couldn't touch them. I think they do this to give the cats a few rests from being picked up and cuddled. They were all very sweet-tempered and pampered cats, and it was really hard to refrain patting the pink and white collared ones when they rubbed up against you. But we made friends with one particular tabby who was snoozing near the door, and had delicious chai lattes. 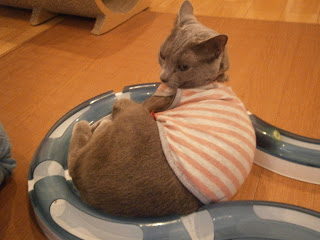 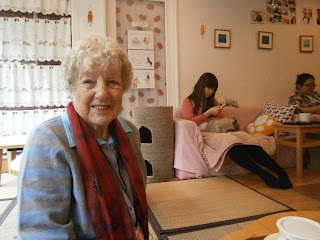 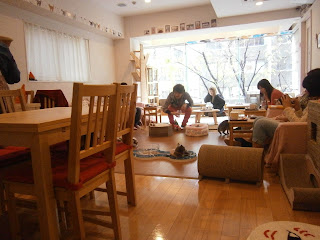 Afterwards we met Margaret and Dad who'd been for a shop, and took the train back to Ueno. The others are going for a walk in Ueno Park, but I came back early to Skype with Sean and update my blog. Tonight I think the dinner plans involve ramen, which makes me happy beyond belief. I'll update soon!
Posted by Miss Prince at 01:21