This is from a Facebook note I wrote last year. But I'm posting it here because it feels more important here :D

I have often wondered what I would do if I found an injured animal on the side of the road. (Sadly, they've all been dead so far. Cold, dead roadkill.) If it were someone's pet, a domesticated animal like a dog or a cat, obviously the answer is 'Help it.' But possums and birds and other assorted wildlife are a different story. I have some friends who would think it the height of stupidity to ignore them and insist on driving around in their car with old blankets and cardboard boxes in case such a situation arises. I have other friends who would think it absolutely moronic to give them a second glance as they are 'just a bird' or 'just a possum'. But if you've ever seen an animal in pain and have been in a position to do something about it, you'd have to be pretty heartless for the thought not to cross your mind.

Today I was driving to my boyfriend's and saw a dead bird in the middle of the road. But five minutes later when I was driving back along the same road, I saw that he in fact wasn't dead - he'd moved himself to the kerb and was lying there, his breathing very shallow and with his wing all bent up behind him. This has happened one other time, but as soon as I opened the car door to check on him, the bird got up and flew away (otherwise known as 'the time Emily got punk'd by a bird'), so I was aware of shock and how quickly birds can recover from it. In this case, I decided just to wait a little to see if he would recover. Stupid, inconsiderate, mentally-impaired drivers were screaming past with no regard for him, their tyres missing him by centimetres, so I parked my car close to him so they'd have to drive around me and couldn't get as close to him. As I waited, calling my Dad to ask him about the RSPCA, some neighbouring honey eaters started divebombing the injured bird so I got out of the car and stood near him. The poor little guy was following me with his eyes, but he didn't look like he could move his head. He looked like a crow (but I later found out he was a raven, and have christened him Edgar). I called the RSPCA and they told me they accept injured wild birds if you bring them to their Burwood headquarters. Apparently the notion that it's unsafe to touch birds is an old wives tale and the woman on the phone said just to get a towel and a cardboard box to drive him in. I had no such materials with me so I called my boyfriend's house.

After establishing that my boyfriend's parents now think I'm some sort of slow hippie for wasting my time with a bird, I drove back to his place to borrow a towel and by the time I got back to Edgar, he still hadn't got up. He let me walk right over to him and crouch down next to him. At this stage he'd been lying there at the mercy of cars and other birds for a good thirty minutes so I figured an appropriate time to wait had elapsed. I v-e-r-y slowly put the towel around him. He looked at me suddenly like 'EXCUSEMEWHATDOYOUTHINKYOUARE- oh, you're not squishing me. Cool'. I wrapped the towel around him and lifted him up and he sat very still in my arms, just watching me. I moved him into the passenger seat of my car and put him on a little nest made from a reusable shopping bag. It was a long drive down Burwood Hwy and I probably pissed off all manner of drivers because I didn't go very fast, but my car is uncomfortable and juddery at the best of times so I didn't want to make it any worse for Edgar. I talked to him the whole time about stupid things and he just stared at me, making sure I didn't do anything freaky like touch him or anything. I also considered the possibility that he may suddenly regain his strength, fly out of the towel and peck me to death before I could get out of the car, so I kept an eye on him too.

We got to the RSPCA and despite all my gentle driving, the bump over the driveway made him sort of shimmy out of his towel. Even though he was free of the towel, he seemed content to just sit on the seat. I parked the car, and opened the door and went to pick the towel up. He stood up and hopped onto my dashboard. 'YOU'RE ALIVE!' I yelled ecstatically. He looked at me grumpily, sitting wedged between the dashboard and the slanted windscreen. 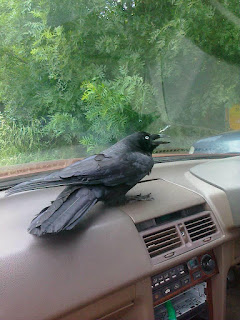 I opened both doors of my car and the back windows. 'Come on sweetpea! Time to fly!' He continued to stare at me and not move, so I held up the towel and nudged him with it. He hopped down onto the seat and let me push him out onto the driveway. He sat there for a bit, his wing still looking a bit bent, but he'd proven he was able to hop around. He didn't want to go back in the towel. Every time he saw me lift it, he'd hop away, but he wouldn't fly. I put my hands on my hips and told him in no uncertain terms that if he didn't want me to put him back in the towel he'd have to show me he could fly. The honey eaters were already divebombing him again (seriously, what is it with those birds?) and he wouldn't fly away. Just hopped around looking lopsided because of his wing. So I threw the towel over him and wrapped him up again. He looked so fuzzy and cute and grumpy just sitting in my arms, but his breathing seemed a lot calmer. 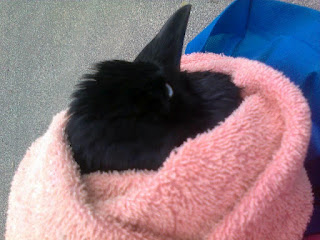 I took him into the RSPCA building and they put him in a cosy little box. They took my details and gave me a ref number if I wanted to follow up on how he was doing and I went on my merry way.

Maybe if I was running late for something, or even had something to do that I could have been late for, I wouldn't have done it, but I know I wouldn't have felt great about leaving him there. So maybe I am a dumbarse for wanting to help a wild bird but poop to anyone who says it. Sometimes it's nice to feel like you saved a life. 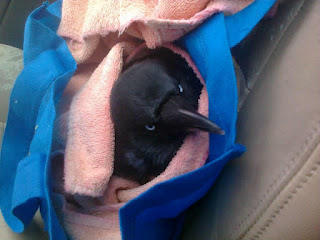